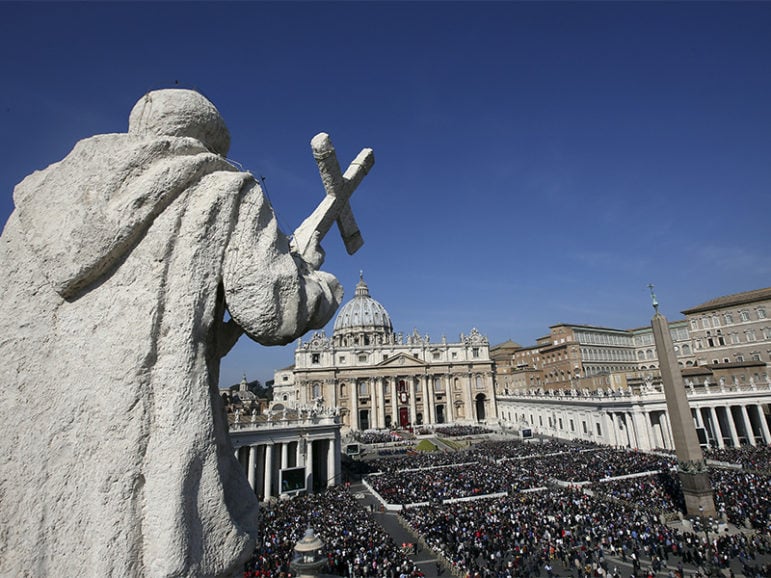 A general view is seen of Pope Francis leading the Easter Mass in St. Peter’s Square at the Vatican on March 27, 2016. Photo courtesy of Reuters/Alessandro Bianchi September 15, 2017 By Jerome Socolovsky ShareTweetShare

VATICAN CITY (AP) — A high-ranking priest working in the Vatican’s embassy in Washington has been recalled after U.S. prosecutors asked for him to be charged there and face trial in a child pornography investigation, Vatican and U.S. officials said Friday.

The diplomat was suspected of possessing, but not producing or disseminating, child pornography including images of pre-pubescent children, a U.S. source familiar with the case said. The source was not authorized to discuss the matter publicly and spoke on condition of anonymity.

The Vatican declined to identify the priest, but said he was currently in Vatican City and that Vatican prosecutors had launched their own probe and sought evidence from the U.S.

If the accusations pan out, the case would be a major embarrassment for the Vatican and Pope Francis, who has pledged “zero tolerance” for sexual abuse. The diplomat would be the second from the Vatican’s diplomatic corps to face possible criminal charges for such crimes during Francis’ papacy. And any trial in the Vatican would come as Francis’ own financial czar, Cardinal George Pell, is on trial in his native Australia for alleged historic sex abuse cases.

The State Department said it had asked the Vatican to lift the official’s diplomatic immunity on Aug. 21. It said that request was denied three days later. For the State Department to make such a request, its lawyers would have needed to be convinced that there was reasonable cause for criminal prosecution.

The circumstances that prompted prosecutors to make the request, however, weren’t clear. The Justice Department, which would have brought any charges, didn’t immediately comment, and the Vatican gave no details about what, if any, evidence had been provided to persuade it to recall the priest.

In a statement, the Vatican said the State Department had notified the Vatican on Aug. 21 of a “possible violation of laws relating to child pornography images” by one of its diplomats in Washington.

A U.S. official familiar with the case said the priest was a senior member of the Vatican embassy staff. The Vatican yearbook lists three counselors who work under the nuncio, or ambassador.

The Vatican said recalling the priest was consistent with diplomatic practice of sovereign states. In declining to identify him, the Vatican said the case was subject to confidentiality while still under investigation. It said the Vatican had asked for information about the case from the U.S; it wasn’t clear if any had been provided.

The Vatican has recalled envoys before, including its then-ambassador to the Dominican Republic, who was recalled in 2013 after being accused of sexually abusing young boys on the Caribbean island.

The Vatican justified its decision to remove Monsignor Jozef Wesolowski from Dominican jurisdiction by submitting him first to a canonical court proceeding at the Vatican, and then putting him on trial in the Vatican’s criminal court, which has jurisdiction over the Holy See’s diplomatic corps.

Wesolowski was defrocked by the church court. But he died before the criminal trial got underway. Dominican prosecutors initially balked at the recall, and they never filed charges because of his immunity.

After he was defrocked, Wesolowski lost his diplomatic immunity and the Vatican said he could be tried by other courts. However, it refused to provide Dominican authorities with information about his whereabouts or how even he had pleaded to the charges.

The Vatican doesn’t have extradition treaties.

The head of the U.S. Conference of Catholic Bishops, Cardinal Daniel N. DiNardo of Galveston-Houston, said the case was serious and that he hoped the Vatican would be “forthcoming with more details.”

“We reaffirm that when such allegations occur, an immediate, thorough and transparent investigation should begin in cooperation with law enforcement and immediate steps be taken to protect children,” DiNardo said in a statement.

Francis has a spotty record on handling sex abuse cases. He won praise from advocates of survivors of abuse for having established a commission of experts to advise the church on keeping pedophiles out of the priesthood and protecting children. But the commission has floundered after losing the two members who themselves were survivors of abuse.

Francis’ promotion of Pell to be his finance czar when allegations abounded in Australia about his past conduct, as well other appointments, in-house decisions and his scrapping of a proposed tribunal to prosecute negligent bishops also have raised questions.