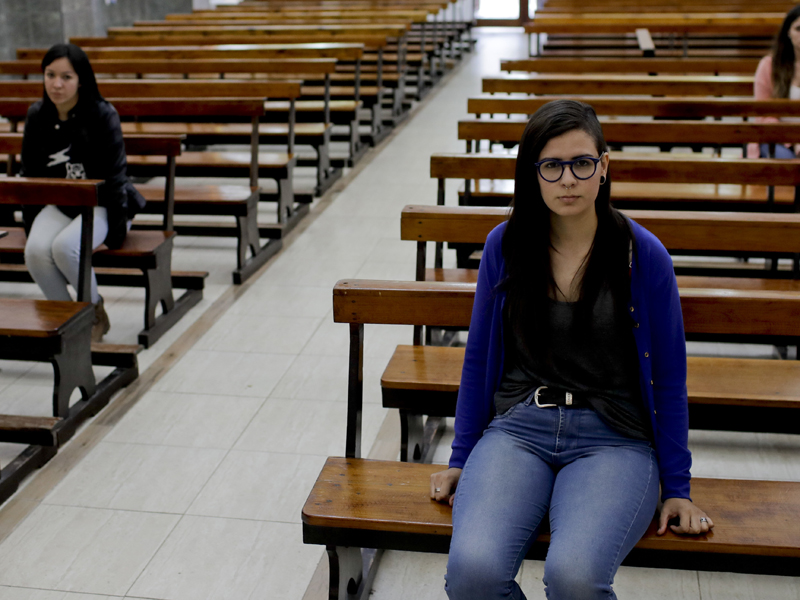 In this Oct. 11, 2017, photo, Karen Maydana, center, Mailin Gobbo, behind right, and Yasmin Detez, behind left, pose for a photo at San Jose Obrero church in Caseros, in the province of Buenos Aires, Argentina. The schoolmates returned to the church and adjacent school they had attended to describe to journalists what had happened, saying they hoped it would help protect children. AP Photo/Natacha Pisarenko October 27, 2017 By Yonat Shimron ShareTweetShare

CASEROS, Argentina (AP) — Karen Maydana says she was 9 years old when the Rev. Carlos Jose fondled her at a church pew facing the altar. It was her first confession ahead of her first Holy Communion.

She blames the trauma of that moment in 2004 for a teenage suicide attempt. And yet she never spoke about it publicly until this year. After hearing that two women who attended her school in the Argentine town of Caseros were allegedly abused by the same priest, she joined them as complainants in a case that in July led to his arrest on investigation of aggravated sexual abuse.

“Unfortunately, there are many of us. But speaking about it now also gives you strength to carry on,” Maydana, 22, said. “I have a 9-year-old niece who’s receiving her Communion this year, and this is not going to happen to her.”

The allegations are part of a growing trend: While Pope Francis struggles to make good on his “zero tolerance” pledge to fight clerical sex abuse worldwide, victims in his native Argentina are denouncing abuses in unprecedented numbers. An analysis by The Associated Press shows that the number of clerics publicly identified as alleged sexual abusers has increased dramatically in the last two years.

Experts attribute the spike to a cultural shift as victims feel more emboldened to denounce abuse, prosecutors are more inclined to investigate complaints of even decades-old abuse, the media are increasingly aggressive about reporting them and courts are willing to hand down stiff sentences.

In the U.S., confidential files on hundreds of pedophile priests have been released either through civil litigation, settlements or court order. The contents have revealed that top church officials worked behind the scenes to control the sex abuse scandal and keep it from authorities as well as parishioners.

“What is really remarkable here is that the survivors in Argentina don’t have the same powerful legal tools that we see in other countries,” Barrett Doyle said. “And yet, we’re still seeing the significant increase in cases.”

The AP compiled a list of 66 priests, nuns and brothers who have been accused since 2001 of abusing dozens of people, most of them children. The figures were gathered from testimonies by victims, judicial and church documents, and local media reports corroborated in conjunction with the BishopAccountability.org database. The number of new reports remained in the single digits each year from 2000 to 2015. But since the start of last year, victims have named 21 more, most accused of decades-old abuse.

“In Argentina, the abuse crisis is just beginning,” said San Francisco Bishop Sergio Buenanueva in Cordoba province, who leads a church council on clerical abuse. “I’m sure the Argentine church is going to face increasing numbers of these disclosures.”

To deal with the expected increased caseload, he said the church is planning to create its first comprehensive database of clerical abuse.  Buenanueva also recently returned from the Vatican, where he met with members of Francis’ sex abuse advisory commission to discuss prevention policies for Argentina, including training of clergy to detect potential abusers and victims.

Abuse survivors are taking action too. Maydana, and her schoolmates Mailin Gobbo, 29, and Yasmin Detez, 25, recently visited the church and adjacent school they had attended to describe to journalists what had happened, saying they hoped it would help protect children. Four other women have joined their case since they reported the priest to law enforcement.

“I don’t care about exposing myself as long as it leads other people to talk,” said Gobbo, who decided to speak publicly after the birth of her daughter.

The priest is accused of abusing Gobbo and Detez at a pool and at their school.“He’d make me sit on his lap and ask me if I had been naughty while he kissed my neck and fondled me,” Detez said while Gobbo shed tears next to her.

Jose has told the court he is innocent and said the statute of limitations has expired in any case. He is appealing the arrest order.

Some of the accused remain in the ministry. In several cases, no canonical or judicial investigation was carried out. Some were probed and dismissed. Others, especially in recent years, have led to arrests and convictions.

A court in Entre Rios province this year sentenced a Colombian priest, the Rev. Juan Diego Escobar Gaviria, to 25 years in prison for sexually abusing four boys, one of them 10 years old. It was one of the stiffest sentences handed down to date against a pedophile priest in Argentina.

“I feel satisfied with the sentence,” said Alexis Endrizzi, 18, who was molested by Escobar when he was 12. “It sided with the victims.”

Two other priests are awaiting trial on pedophilia charges after they were accused this year in the same small province.

In one of the most shocking cases, prosecutors say at least 20 children at the Provolo Institute for deaf and mute children in Mendoza province were abused. Some of the victims say they were molested by an Italian priest, the Rev. Nicola Corradi, who also had been accused by some of the dozens of abuse victims at the Provolo’s school in Italy but never faced justice there. Corradi, now elderly, was formally charged by Argentine prosecutors in November and is under house arrest awaiting trial in Argentina. Corradi’s attorney declined to comment on his client’s plea or any other detail of the case.

Advocates of priestly abuse victims question how Francis could have been unaware of the allegations against Corradi since he was publicly named by the Italian victims starting in 2009 and most recently in 2014.

One of the cases that has festered for years is that of the Rev. Hector Ricardo Gimenez, who had been detained after several abuse complaints in 1985 and 1996, but was freed by the courts.

In 2013, Julieta Anazco led other women in publicly confronting Gimenez as he celebrated Mass at a hospital chapel, accusing him of abusing her and many others as children decades before.

“He’d jump into the shower with the excuse of washing us,” said Anazco, who went on to become president of the Survivors’ Network of Ecclesiastical Abuse.

The Archbishopric of La Plata said in a statement to the AP that the church had found Gimenez guilty of previous abuses and that he had been banned from ministerial duties, a common church sanction for elderly priests accused of abuse.

It also said that Anazco came to a meeting at the La Plata archbishopric in 2015, and that an official for the archdiocese heard her complaints and “shared the cruelty of these crimes and the importance that no one guilty of them remains unpunished.”

Anazco’s criminal complaint initially was dismissed, but was later reopened and remains pending, according to her attorney.

The AP tried to reach Gimenez, who is in his 80s, at the nursing home where he now lives in the city of La Plata, but he declined to comment.

No official numbers on clerical abuse have been published by Argentina’s church, government or its judicial system, and the issue is still something of a taboo.

But Pope Francis tried to break the stigma by phoning Rufino Varela after he revealed that he had been abused as a child by a priest at a school that Argentine President Mauricio Macri also attended. Other students at the school told the AP that they suffered abuse by the same priest, who has since died.

Francis has pledged “zero tolerance” for abuse, but he has also said he never had to confront the issue as archbishop of Buenos Aires, where he served from 1998 to 2013.

Recently, he has acknowledged that the church was “late” in recognizing the scale of abuse and the damage it wreaked on victims, and said the practice of cover-up and moving pedophiles around was to blame.

Many Argentine victims of abuse say they feel abandoned by the church.

“You realize the complicity, the cover-up of the church hierarchy that goes all the way up to the Vatican,” Anazco said.

(Associated Press writers Nicole Winfield at the Vatican and Paul Byrne and Victor Caivano in Buenos Aires contributed to this report.)