Faith groups provide the bulk of disaster recovery, in coordination with FEMAoct 7th zodiac sign(USA Today) — If you donate bottles of water, diapers, clothing or any other materials to hurricane victims in Texas or Florida, your donation will likely pass through the hands of the Seventh-day Adventists before it gets to a storm victim. The Christian Ethics and Christian Beliefs classes, under the guidance of Dr. Bill Kilgore and Pastor Russ Laughlin, VP for Spiritual Development at Southwestern Adventist University, load a plane with supplies headed to aid Hurricane Harvey victims. Photo courtesy of Southwestern Adventist University September 11, 2017 By Paul Singer ShareTweetShare Hurricane Harvey took nearly everything Lily Galindo owned, but even as she walks through what’s left of her destroyed home, she vows to rebuild. She says she is thankful to friends and her church for helping her start over. (Aug. 31) AP

(USA Today) — If you donate bottles of water, diapers, clothing or any other materials to hurricane victims in Texas or Florida, your donation will likely pass through the hands of the Seventh-day Adventists before it gets to a storm victim. That’s because the Adventists, over several decades, have established a special expertise in disaster “warehousing” collecting, logging, organizing and distributing relief supplies, in cooperation with government disaster response agencies.

Likewise, the United Methodist Committee on Relief is known for its expertise in “case management.” After the initial cleanup — where the Methodists have work crews helping pull mud out of houses — the church sends trained volunteers into the wreckage to help families navigate the maze of FEMA assistance, state aid programs and private insurance to help them rebuild their lives. UMCOR also trains other nonprofits to send their own case managers into the disaster zone.

In a disaster, churches don’t just hold bake sales to raise money or collect clothes to send to victims; faith-based organizations are integral partners in state and federal disaster relief efforts. They have specific roles and a sophisticated communication and coordination network to make sure their efforts don’t overlap or get in each other’s way.

The Convoy of Hope, a nondenominational Christian organization, specializes in feeding. Before Hurricane Irma made landfall in Florida, the Springfield, Mo.,-based Convoy had three trailer trucks stocked with food, water and sanitary supplies parked in the state waiting to deploy to areas hardest hit, said spokesman Jeff Nene. In major disasters, the organization will set up feeding stations, sometimes at FEMA’s request and even using government-provided food and equipment.

The Adventists have agreements with states around the country to provide warehouse services in the event of a disaster. “Right now, in the state of Texas, we are going around with FEMA trying to help them select a facility,” said Derek Lee, director of disaster response for Adventist Community Services. “It’ll actually be the state’s facility but it’ll be us that helps them manage it. We are going around with them right now trying to help them pick out a facility that will accommodate what the need is going to be on the ground.”

Samaritan’s Purse, an evangelical aid group run by the Rev. Franklin Graham, has trucks at the ready in Florida with chainsaws and debris removal experts to help clean up houses. After initial cleanup, the group has contracting services available to help the needy rebuild their homes. The group has responded to 20 disasters already this year, said Luther Harrison, vice president of North American Ministries for Samaritan’s Purse.

“FEMA – they have been a big blessing to us, they’re an assistance to us,” Harrison said Saturday. “For Hurricane Irma, the majority of our equipment has already been dispatched to Texas … so our office in Canada is bringing their equipment across the border and FEMA was instrumental in helping us clear that with customs and getting all the paperwork done.”

Harrison said a Samaritan’s Purse disaster relief unit is a two-story, 53-foot trailer that has tools and equipment, including two dozen chainsaws, blue tarps for roofing and kits for helping homeowners clear mud out of their houses. 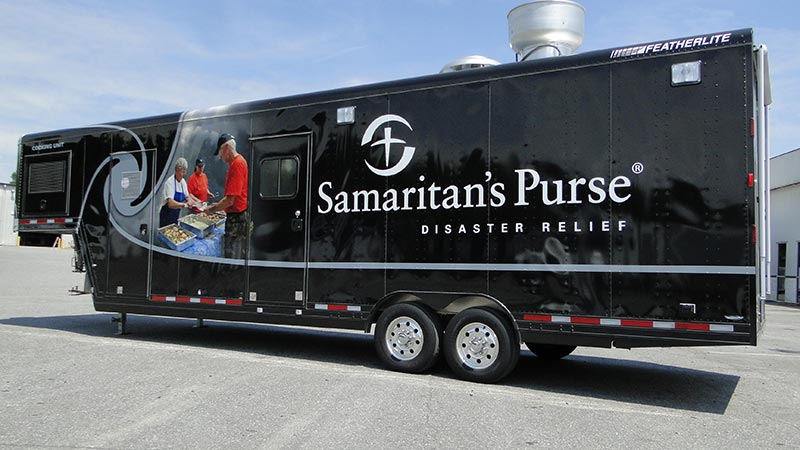 Photo courtesy of Trailers of the East Coast

One of the most critical resources the faith groups can provide is manpower. The United Methodists have 20,000 trained volunteers around the country who can be called up for “early response teams,” basically small crews that can help with debris removal and home cleanup, said Cathy Earl, UMCOR’s director of disaster programs. “They are trained, they are badged, they are background-checked, and they are part of the team that can be called up on short notice to respond,” she said.

The crews come with more than just chainsaws, Earl said. “They have a person who is a designated listener so that person can sit down and be an ear for somebody if the homeowner needs that.”

The efforts of volunteer groups come at essentially no cost to the government, yet they also have a significant cash value to the states they serve.

States are obligated in most cases to pay a “match” for federal disaster aid, generally about 10 percent of the amount the federal government is paying in the immediate aftermath. But FEMA policy allows states to count volunteer hours as a payment toward that match, at $25 per hour. Harrison said his group has already logged and reported to Texas more than 27,000 volunteer hours worth more than $675,000 toward the state’s required match.

“About 80 percent of all recovery happens because of nonprofits, and the majority of them are faith-based,” said Greg Forrester, CEO of the national VOAD. The money is “all raised by the individuals who go and serve, raised through corporate connections, raised through church connections,” and amounts to billions of dollars worth of disaster recovery assistance, he said.

And it is not just Christian congregations involved, Forrester said. There are also other faith groups, including Islamic, Buddhist and Jewish relief agencies, at work in disaster zones.

“FEMA cannot do what it does so well without the cooperation of faith-based nonprofit organizations and churches,” said the Rev. Jamie Johnson, director of the Department of Homeland Security’s Center for Faith-Based and Neighborhood Partnerships. “It’s a beautiful relationship between government and the private sector and it is something to behold.”

FEMA does not assign work to the state agencies or the faith-based groups, Johnson said, but “we affirm the work that they are already doing. … FEMA brings the groups into its national command center to work with us because they have their people on the ground.”