Jewish, Muslim customers file lawsuits alleging bacon in their food at KFC, Denny’sleo single horoscope(USA Today) — While the claimants say their beliefs were violated, the restaurants say the bacon placement was not intentional. 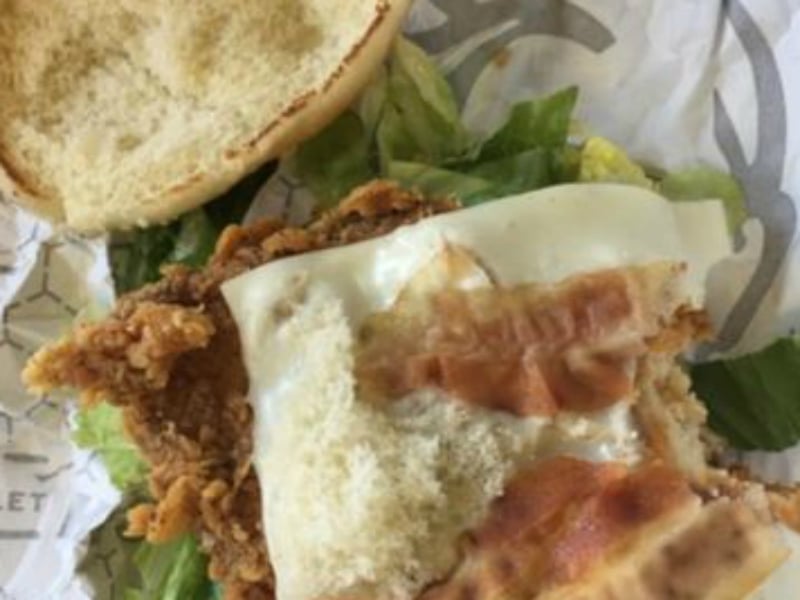 A Muslim couple from Dearborn who doesn’t eat pork, Askar Abubaker and Hasinah Saeed, said they found bacon on chicken sandwiches they ordered at a KFC restaurant in Lincoln Park on July 1, 2017. Attorney Majed Moughni filed a lawsuit on their behalf against KFC in August 2017. This is a photo of one of the sandwiches they said had bacon in it. (Photo: Majed Moughni) September 4, 2017 By Niraj Warikoo ShareTweetShare

The lawsuits are the latest cases in Michigan and the U.S. involving food and faith, a sensitive issue for some religious followers. While the claimants say their beliefs were violated, the restaurants say the bacon placement was not intentional.

On Tuesday (Sept. 4), Dearborn attorney Majed Moughni filed a lawsuit on behalf of a Jewish woman in Sterling Heights, Angela Montgomery, 30, who says she found bacon in a vegetarian omelet she ordered at a Denny’s restaurant in Sterling Heights.

The lawsuit says Montgomery “is a practicing Jew and whose religion forbids the eating of any pork product.” On August 25th, Montgomery went to Denny’s and ordered a “loaded veggie omelet,” which is not supposed to contain any meat, the lawsuit said.

But, Montgomery alleges, the omelet had bacon in it. She said she first noticed something was odd when she took a few bites. She then cut into it and found the bacon. Montgomery said the waitress and manager apologized and said it was a mistake because in their kitchen the bacon container was next to the containers for vegetables.

The manager offered to make her another omelet and deduct the omelet price from her bill, but Montgomery said her appetite was ruined.

She said she told the employees: “Why would you have the bacon next to the vegetables, don’t you know how many people don’t eat pork.”

A pig is “an abominable food,” Montgomery told the Free Press. “it’s like the most vile, disgusting creature on planet Earth that’s not supposed to go in your body, and I ate it. To me, that’s a poisoning. I was poisoned.”

An employee at the Denny’s restaurant in Sterling Heights refused comment. Messages left with a spokesperson for Denny’s were not returned.

In a separate lawsuit, filed Aug. 22, a Yemeni-American Muslim couple from Dearborn, Askar Abubaker, and his wife, Hasinah Saeed, who wears an Islamic face veil, ordered chicken sandwiches at a KFC (Kentucky Fried Chicken) restaurant in Lincoln Park on Dix Road on the afternoon of July 1.

The KFC employee replied: “We have cheese and bacon, it’s going to be an additional $1.”

Abubaker said he asked whether it was American cheese; the employee said only Swiss cheese was available.

After taking bites, and finding out there was bacon, he told the cashier: “What is this? Why did you guys put this in my food?”

Abubaker said the cashier replied: “This is bacon, I’m sorry, I’ll make another one.”

The Muslim couple alleges the “employees were looking at us and smiling.”

A KFC spokesman told the Free Press the bacon was the result of miscommunication.

“At KFC we respect the religious beliefs of our guests of all faiths,” said a KFC spokesman. “We believe this lawsuit was filed as a result of a miscommunication between the guest and our team member. We cannot comment further on pending litigation against one of our franchisees.”

The lawsuits allege breach of contract, negligent representation, and are asking for monetary damages for what they said is emotional and physical distress from having eaten bacon. Both lawsuits have been filed in Wayne County Circuit Court.

The attorney handling the cases, Moughni, said there needs to be changes in how restaurants are handling food.

“You can’t allow this practice to continue, whether you’re Muslim or Jewish, and you walk into an establishment and they don’t care about what they are serving.”

Moughni filed a similar lawsuit in May against a Little Caesars Pizza in Dearborn that advertised halal pepperoni pizza, which Moughni said wasn’t halal and contained pork. An attorney for Little Caesars has said the lawsuit should be dismissed and is without merit.

In Alabama last month, a Muslim family said a McDonald’s intentionally put bacon in 14 McChicken sandwiches, reported the Decatur Daily News. McDonald’s said the placing of bacon in the sandwiches was not intentional.